Beyond comics: the Pratt you (perhaps) don’t know
Corto Maltese is fine. Other stories like Sgt. Kirk, The Scorpions of the Desert and Ernie Pike is fine. Books, novels, watercolours are fine. But Hugo Pratt did a lot more. Things that are perhaps little known, curious, strange, unobtainable or collectors’ items. 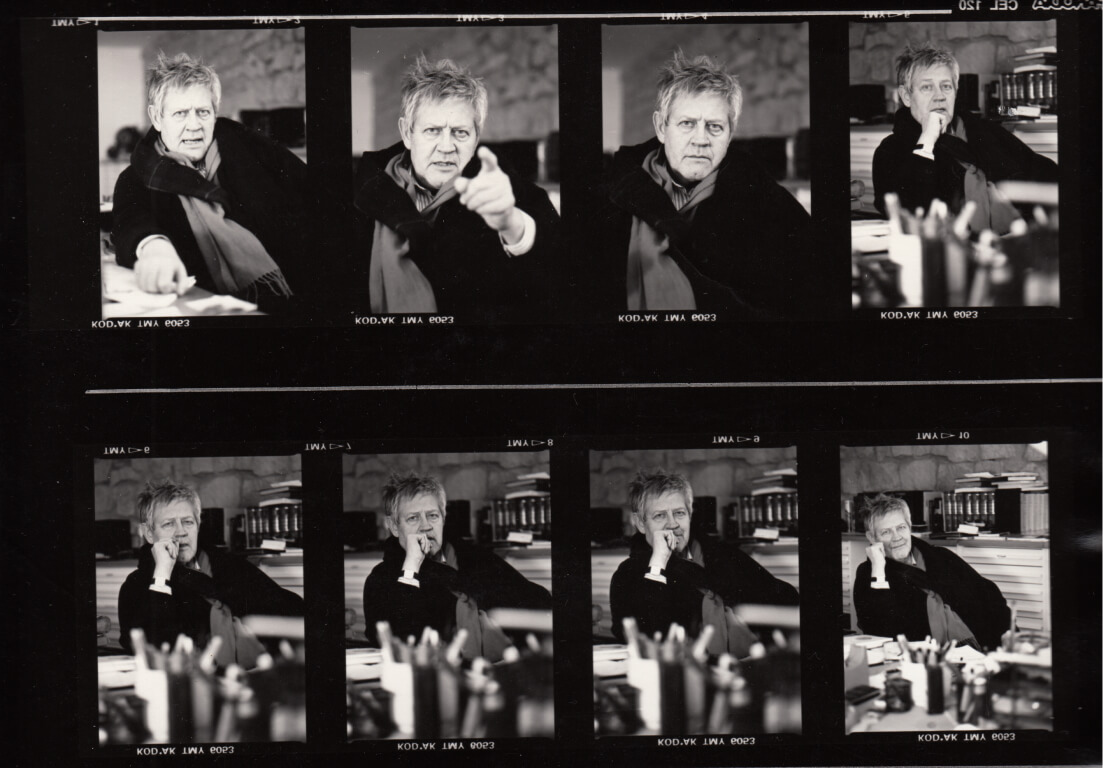 Who knew – for example – that in 1993 he designed the livery of a Formula 1 car (the Ligier driven by Martin Brundle) commissioned by the tobacco manufacturer Gitanes? The car designed by Pratt raced the last two grand prix of the season in Japan and Australia, both won by Ayrton Senna, but a German boy we loved was emerging on the horizon: Michael Schumacher. Or that he illustrated a story by Aleksandr Solzenitsyn in Kent, one of the first all-male magazines in 1969? In 1984, he created a strip for Puma featuring Corto Maltese in the ‘celestial walker’ version. The claim said: ‘Puma, for adventurous feet only’. It was the story, told by Corto, of Puma, twin brother of Ocelot (two supposed Aztec gods) who became the warrior of the race and the warrior of the wind. At the end of the story an inscription bearing the words: “The celestial walker is not only a myth. He is also a reality. Here, I present to you Puma who, thanks to his magical footwear, always comes out on top in the world of adventure”. In 1985, when Moleskine had yet to become what it is today, Pratt created “Diario di bordo – Un taccuino per un diario di viaggio” (Logbook – A notebook for a travel diary) enclosed with the magazine Corto Maltese and also – in the same year, again enclosed with the same magazine – he made “Hallo? Parla più forte” (Hello? Speak up!), a phone book, as was used until the advent of mobile phones. There is no shortage of calendars (he made one in 1971 with other comic strip authors such as Guido Crepax, Dino Battaglia, Franco Caprioli, Rino Albertarelli and Walter Molino), nor albums for the collection of stickers (one in 1978 for Panini of Modena with the Corto stickers, another in 1988 for the Spanish market), wine labels from the Domaine Wannaz-Chenaux in the Vaud canton in Switzerland, postcards for a Carpenè Malvolti prize competition (which, in 1994, won a nine-day stay for two in the Maldives), postage stamps (issued in his honour by Lucca Comics in 1996) and even playing cards (the Tarot cards of Corto Maltese). 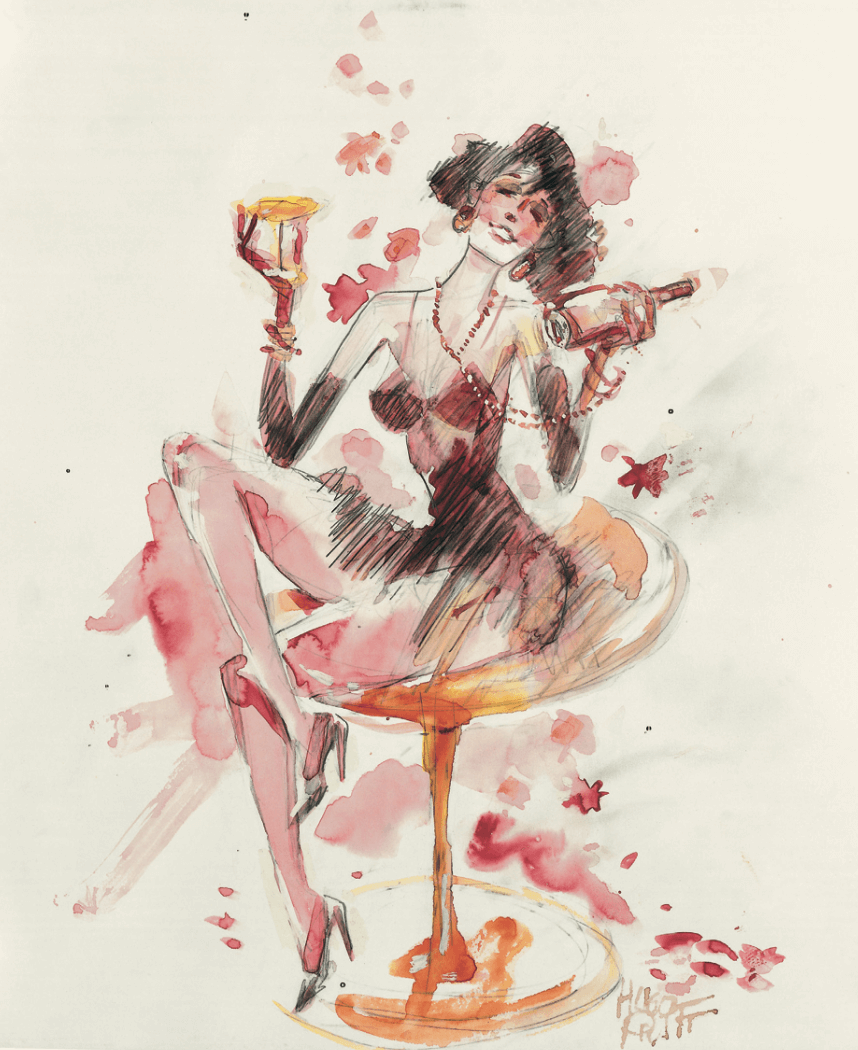 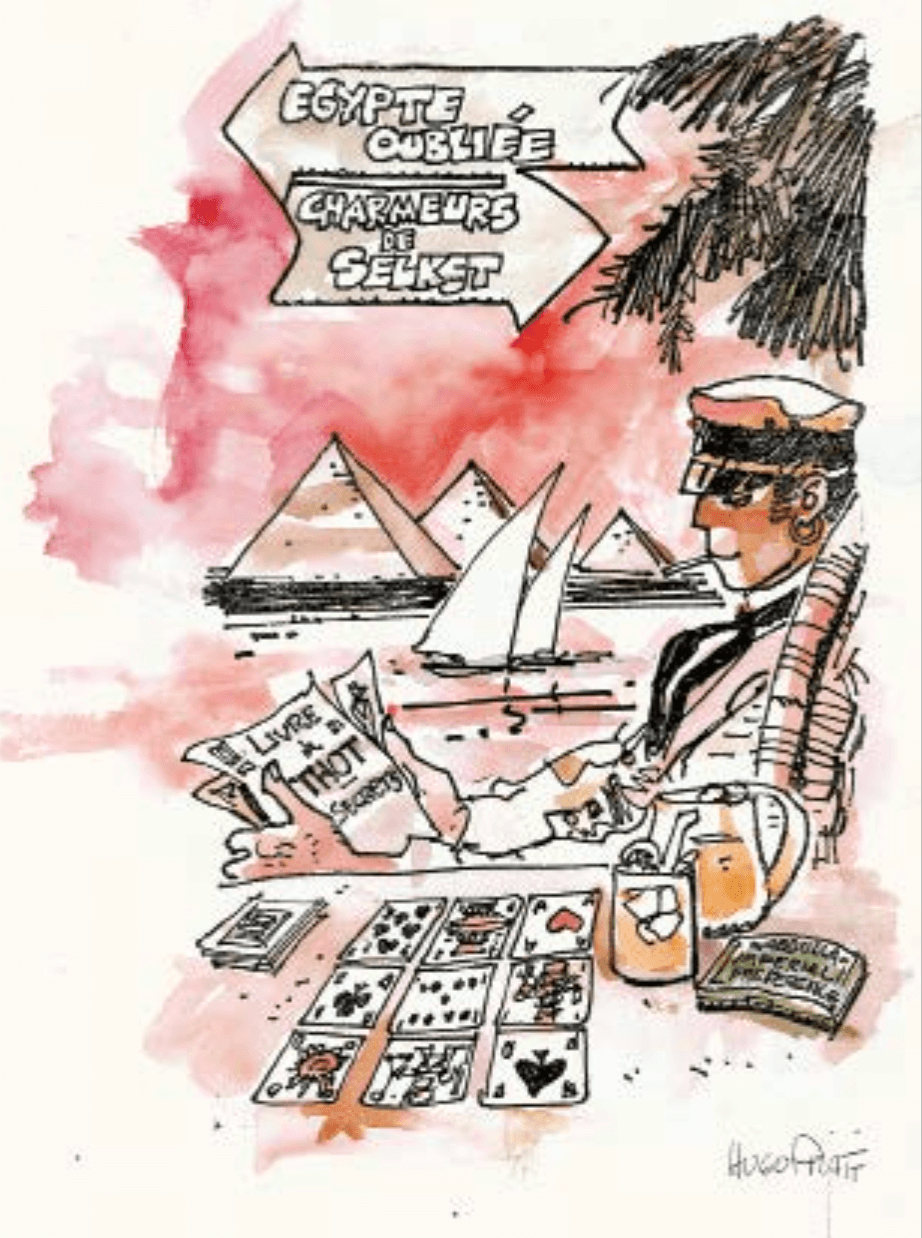 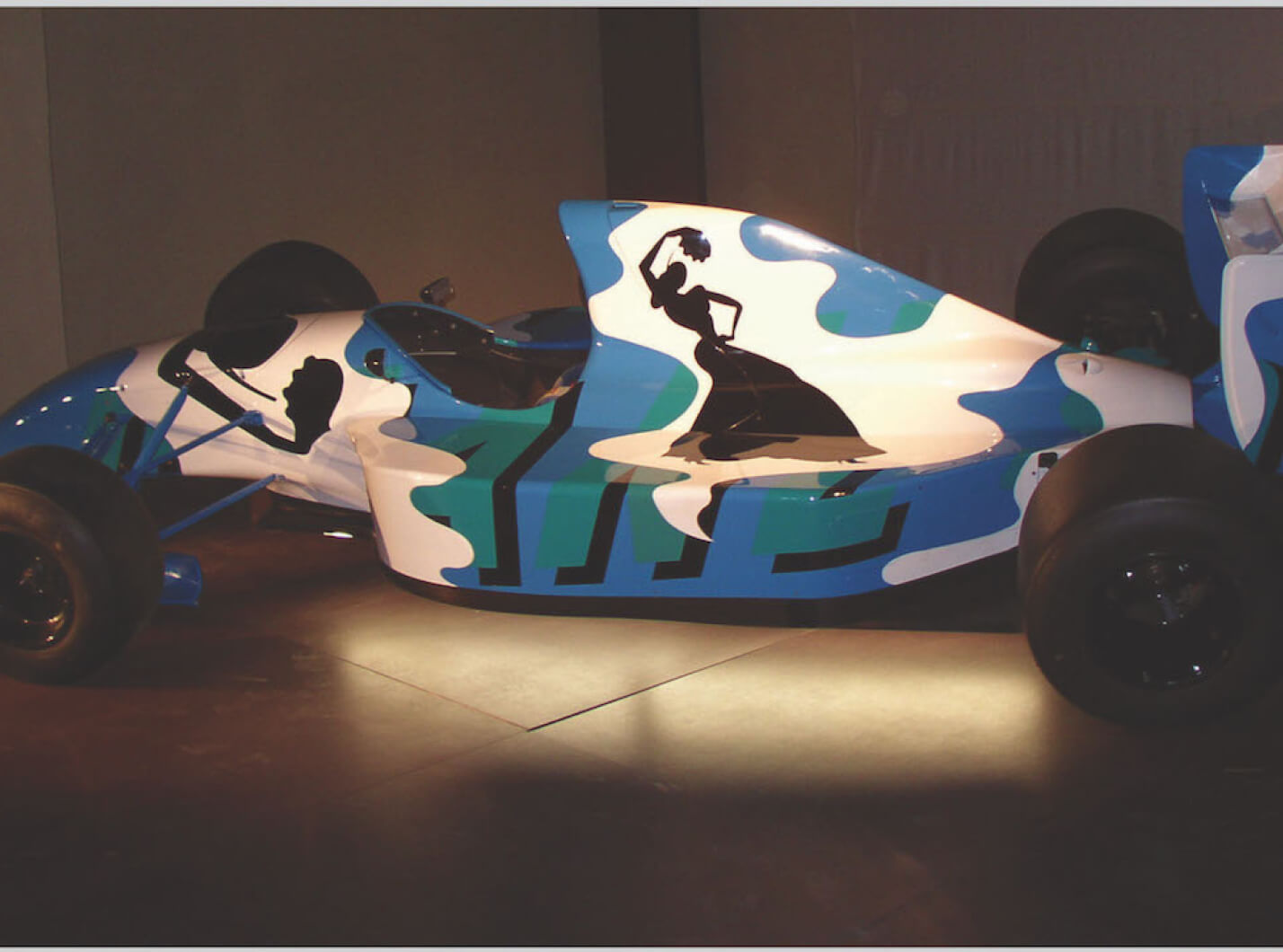 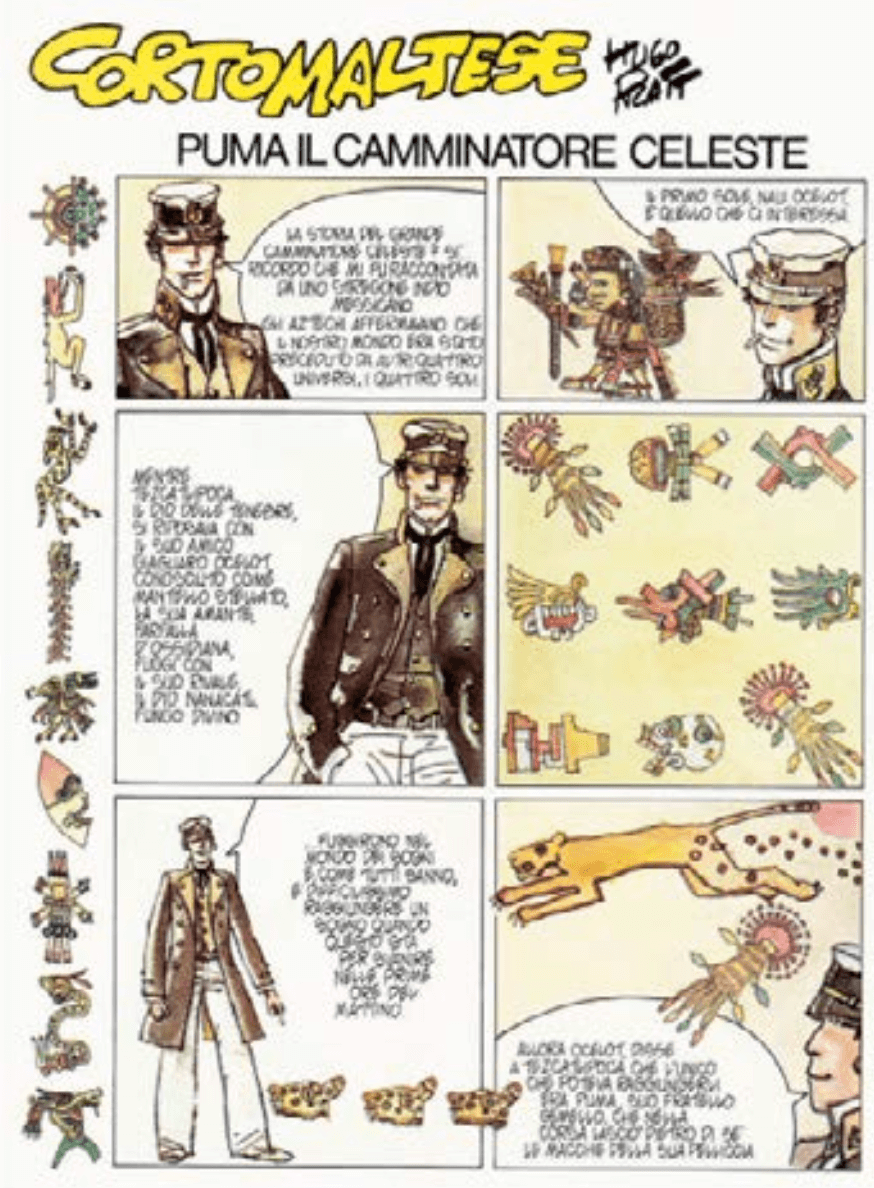 As a lover of music, all music but especially jazz (remember? in Argentina he also became good friends with Dizzy Gillespie), Pratt loved to draw the record covers of his musician friends. He did so for Paolo Conte, Sergio Endrigo, Sylvia Fels, Lio, Totò (his interpretation of Malafemmina, drawn with a watercolour, was marvellous….), Marc Robin, Ogoun Ferraille, Nino Ferrer and others. And yet very few people know that Hugo also made a record: it was 1981 and, for the documentary ‘La ballade plus loin’ by Michel Tournier and Jean Claude Guilbert, he sang a version of ‘Maid of Amsterdam’, a traditional English ballad from the 1600s that had become very popular among Queen Elizabeth’s sailors. The song was later recorded on a three-CD collection published by Casterman entitled Notes de voyage – les musiques de Corto Maltese and published in Italy by Rizzoli Lizard with the title “Note di viaggio-Le musiche di Corto Maltese”.

Lastly, Hugo Pratt, actor. Pratt adored cinema. Adventure and action films, Marlowe’s detective stories, the great classics and his beloved Ridley Scott. But, more for fun than for professional inspiration, the great artist also starred in four films between 1977 and 1992. They are: “La notte dell’alta marea” by Luigi Scattini with Giacomo Rossi Stuart, Annie Bell and Anthony Steel in which Pratt plays the owner of a blue jeans company. Then, in 1978, “Quando c’era lui, caro lei” with Paolo Villaggio, Mario Capotenuto, Maria Grazia Buccella and Gianni Cavina. Here Pratt is a senator who, in his past, had been an inconclusive anarchist. In 1986, it was the turn of “Rosso sangue” directed by Leos Carax starring and with Michel Piccoli and Juliette Binoche. Lastly, in 1992, “Nero Italia” by Giancarlo Soldi, a screenplay by Tiziano Sclavi with Sergio Castellitto and Chiara Caselli with Pratt in the role of a police commissioner not exactly to be taken as an example. 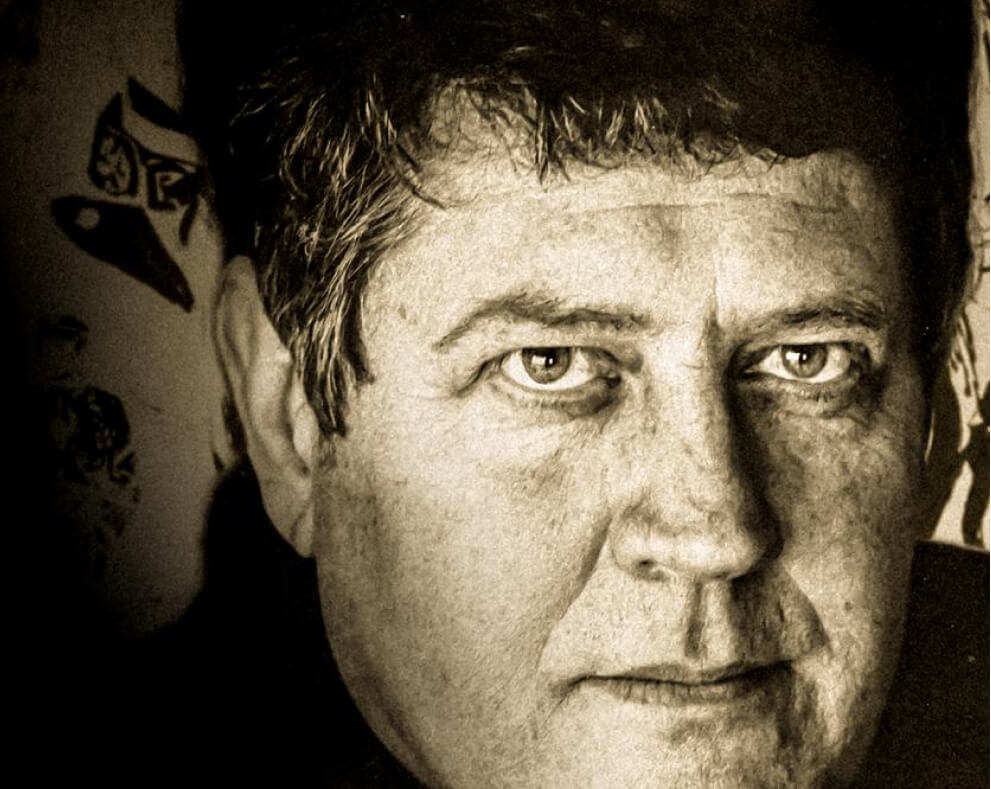